Faculty of Animal Science, Udayana University Holds Judiciary for the Period of June 2022 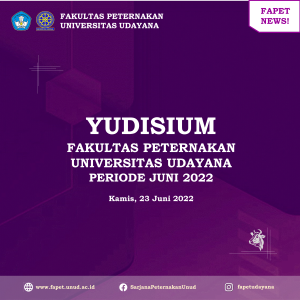 “This year's graduates have the lowest Grade Point Average (GPA) of 3.36 and the highest of 3.94 with an average GPA of 3.81. A total of 7 graduates graduated with the predicate of Very Satisfactory and 24 graduated with the predicate With Praise. The longest length of study is 4 years 10 months (10 semesters) and the fastest is 3 years 10 months (8 semesters) with an average length of study of 4 years 1 month. The best graduate from the Bachelor of Animal Science Program was achieved by Mohammad Ar Raafi'i Lisandy, S.Pt., with a study period of 3 years and 8 months, GPA of 3.93 and received the title With Praise. The best graduate with the highest GPA was achieved by Ni Kadek Risnayanti, S.Pt., with a study period of 3 years and 11 months, a GPA of 3.94, and was awarded the title With Praise”.

This judiciary is also broadcast live by Udayana TV at the link https://youtu.be/a8quyHPNLcU.